Notes: I wrote this about a year ago for Seasons: A Supernatural Fan Fiction Anthology, which was published several months ago. I posted the fic to AO3 soon after the publication, but only just now realized I never posted it here. Oops.

that moment when even your own livejournal insists on grouping gilfoyle and dinesh together into a single tag: 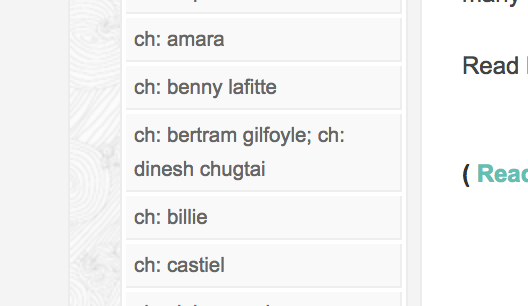 gilfoyle was right. the machines are onto us. they know everything. and they have impeccable taste in ships.

today i found several more white hairs growing out of my 26-year-old head, and later spent a moment too long standing next to my car, trying to remember if i had turned the engine off when i parked, even though i was looking straight at the keys that i was holding in my hand. i was driving home last weekend but couldn't remember what street i was on or where i was going, even though it was the same street i always take to go home. i'm living with my best friend of the past 13 years but more and more frequently i find myself unable to hold a conversation with her because i can't remember what she just said to me or what my response should be.

this is all probably just a function of prolonged sleep deprivation, because i haven't had more than 5 hours of sleep on weekdays for several weeks now. i hate my job but i also hate the job hunting process and most especially i hate freelancing. everything is in stasis; it feels like some sort of suspended animation, and also everything is too loud and too quiet all at once.

i'm majorly bummed that i accidentally spoiled this week's spn for myself, although it's my fault for forgetting to blacklist spoiler tags before going on tumblr, and also for forgetting to watch and keep up with s13 at all in the first place. i'm forgetting a lot of things lately.

today is may 4th. i keep thinking that it's march. i think i left my brain in march, and then it just got up and wandered away. do let me know if you find it, would you? it's grey and squishy and answers to "charlotte", "char", "yuting," or "i have 50k words of extremely well-written and in-character dinesh/gilfoyle slow-burn fanfic just for you."

i'm so balls-deep in silicon valley it's frankly ridiculous. it's a long time coming, though; i can't believe i resisted The Call of Fandom for four entire seasons, but now all i fucking think about is this goddamn show. i think the longest i've gone without rewatching a random episode since s5 premiered is two days? maybe one and a half. multiple people have called me out on it (not in a disparaging way, more just bemused). frankly, it's getting fucking embarrassing.

i found this gifset of dean on tumblr, and while i have absolutely no idea what the context is (and please don't tell me! i'm going to watch all of s13 during summer hiatus!), every single one of these is so. fucking. relatable.

please excuse the shoddy screencapping; i'm not sure how to post gifsets on lj, or if it's even possible.

also, i miss photoshopping things for fun and not for work.

hi y'all. i've been away from LJ for so long that i legitimately forgot i even used to spend inordinate amounts of time on here. this is where i used to come to scream about tv shows and get emo about life, but since i've been SUPREMELY checked out from pretty much all fandoms i was ever a part of from 2012 through mid-2017, i haven't really made an effort.

anyway, i'm alive, i'm still being salty over on twitter, and i moved out of my parents' house! i'm living with my best friend from middle/high school, i recently turned 26, i'm still working at the art gallery but lasciviously side-eyeing new employment, and i want so badly to get my scuba license this summer but am on such a tight budget with both time and money that i could cry. which basically puts me in the same boat (lol) as most people my age, i think. except maybe the scuba thing is a tad more esoteric.

i think the point of this post was just to say hi. now i'm scrolling through my post tags, and holy shit i can't believe i used to have so many. it feels like literal years since i've been on here, even if the front page of my blog says it's just been a few months.

i may come back and be more active after i catch up on spn (i haven't seen a single episode of s13... i want to, eventually, just... haven't gotten around to it. eh.) or...... i may not. who knows. this apathy feels very very liberating.


I'm traveling with my family around the end of December so I'm posting this a tad early as I'd like to get cards out before I leave. As always, fill out your info at the link above for a little holiday cheer! Anyone can sign up :) <3

Title: to ashes
Pairing/Characters: Sam, Dean, past Sam/Jess
Rating: PG
Word Count: 855 words
Summary: He climbs back into bed and buries himself deeper into his thin, stiff sheets, trying not to breathe in too much of their mustiness, and he holds on tight. Like he's still back there, back then, and nothing went wrong and no one burned. Like he could dream her back to life, if only he tried hard enough.

Notes: A quick self-indulgent thing that I threw together after watching the season finale one too many times. Unbeta'd, so all mistakes are mine and mine alone. Enjoy!
Read below, or on AO3.

an excerpt from my fic, Pesach, for the upcoming SPN Short Stories / Seasons project!

Anael, in all her resplendent glory, has fallen. Whispers in the garrison hint that the next of their Father’s plagues was too much for her to bear. Sympathizer, they call her, and foolhardy, and soft.

They, all of them, have visited holy wrath upon the heretics of their Father’s creation. First Sodom and Gomorrah, and now Egypt. Choosing to fall after the fact does not absolve the deed — does not wipe the blood from their hands. But the blood of sinners and nonbelievers must be shed in order for Father’s chosen to survive.

Anael believes that is wrong and has torn out her grace in protest, resigned to live out her days as human, wherever and whenever what’s left of her reaches Earth. But it is not wrong, Castiel thinks. It is just. The Jews must go free, and Pharaoh had his warnings.

keep a lookout for news re. publication of the short stories anthology here, and check out all the other story previews here!

so like. i went on a date tonight, and it went AMAZINGLY well. like, we were able to connect right away, he's a super good guy, we have a lot in common (to the point where it's almost eerie), he's someone i would definitely be friends with, basically best case scenario in every way. and i guess i like him? even though i've just met him??

and this is where it gets iffy, because, like, i am Very Uncomfortable with intimacy and sincerity and vulnerability. which is okay at the beginning, i think, when you're still getting to know the other person and stuff. but he's so... open? and i'm not? and i don't know how to set boundaries, i guess, because i can't just be like, hey i think you're cool but i'm also emotionally defective and not used to this sort of thing and i don't know what i'm looking for but at this point i should probably just roll with it.

also, he called me sweet. which, like, BIG LOL.

i think i'm overthinking this, but also i don't know what to do. i need to stop self-sabotaging, but i can't even figure out why i want to start dating again in the first place. i guess just because i was looking for something to do? but then that seems kind of shitty, like i'm leading him on or something. i don't know. i haven't dated since high school, so my experience in this is very limited, and although i had a good time back then it's not something i necessarily need in my life, you know? like, abstractly, down the line, at some point it would be nice to get married and shit, but...... i don't know. i feel like i've already passed the point of no return tonight and i'm not sure how i feel about that.

i guess a big part of my brain is just, like, hyperlogical about all this and my line of reasoning is: i've done this before, it was fine, why do i need to do this again. which, i am aware, is not how functional human relationships work. other people aren't just checkboxes off my bucket list. but at what point can i bring this up, and how do i do it in a way that doesn't make me sound like a fucking sociopath????